A hidden gem in the High Weald of Sussex, sensitively planted to enhance the natural landscape. A botanical treasure trove and classic English idyll make High Beeches one of the finest gardens in the South East


There are five of the eleven Grandia Rhododendrons in the garden here at High Beeches.  Four of them are in flower at the moment.  This is a particularly good year for these rhododendrons as they are flowering later and therefore have not been damaged by frost.  The Grandias are very striking plants growing into small trees or very large shrubs with huge leaves and magnificent flowers.

Rh. sinogrande was first discovered in China by George Forrest in 1912 and it first flowered at Heligan in Cornwall in l919. It can reach 30 feet in height and the leaves can be 15 inches long

Rh kesangiae is a recent introduction from
Bhutan.  There is a white form as well as the pink.

Rh macabeanum is a native of Assam and was discovered in 1882 by Sir George Watt.  It can make a tree of 40 foot in the wild and its leaves are up to a foot long.  The flowers vary from a pale sulphur yellow to a deep yellow.

Rh. montroseanum (also known as mollyanum) seed was collected by Frank Kingdom Ward in Tibet and was raised at Brodick. It is a large plant with long narrow leaves and striking pink flowes.

The fifth Grandia Rhododendron to be found in the Garden is Rh siderum which has yet to flower.
Posted by Unknown at 13:44 No comments: 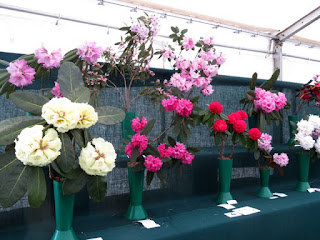 It has been a difficult spring, cold and wet, which has put the garden at least 2 weeks behind.  The daffodils and pretty miniature narcissi are doing their best to brighten up the garden.

There were very few of the early Rhododendrons in flower for us to show at the Early Rhododendron Competition at the Savill Garden last weekend.  In spite of the challenging weather there was a great deal of competition from amongst others Exbury, Nymans, Caerhays and Minterne.  High Beeches won the most points for a garden in the South East as well as being 2nd in the class for four vases of different ornamental shrubs. 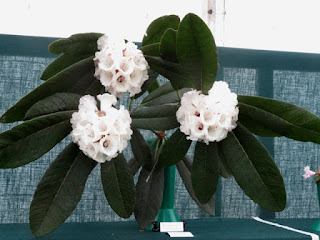 There were some beautiful plants on show .  It is a great opportunity to see the many different forms of species Rhododendrons.

As the weather warms up more and more of the Rhododendrons are coming in to flower and the Cherry blossom will soon be here.  There are carpets of primroses and I was pleased to see that one or two of the fritillaries planted last year are flowering. 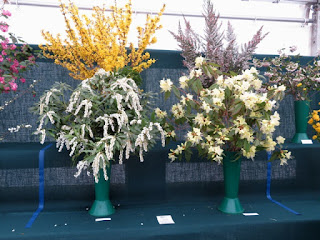 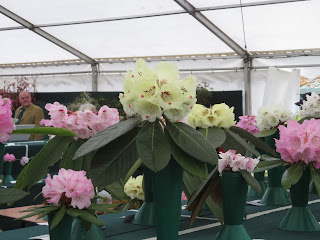 
The warm days are bringing plants into flower in the garden.  Snowdrops, crocus and Lent Lillies are starting to bloom along with some of the earlier flowering shrubs.

It is slightly surprising to see blooms on Camellia Lady Clare in January.  This wonderful camellia comes from Japan and was originally called Akashigata until it was imported into the US when it was named Lady Clare.

Hamamelis mollis, the chinese witch hazel, has been in flower since before Christmas.  A welcome sight on a winters day and on a sunny day its sweet scent fills the garden.  It was first
introduced by Charles Maries in 1879 and later by Ernest Wilson.


Rhododendron Nobleanum Venustum (arboreum x caucasicum) is one of the earlier
rhododendrons to flower.  An old hybrid it was raised by William Smith at Norbiton Common, nr Kingston in 1929.  This plant at High Beeches is a layer of an old plant in the garden.


Rhdodendron spinuliferum is in flower a little early this year.  An unusual rhododendron with its tubular red flowers and protruding stamens in erect clusters.  A native of Central and Southern Yunnan discovered by Abbe David and introduced in 1907.

Four Early Summer Plants
﻿
The early Rhododendrons and Azaleas may have finished flowering but there is still plenty to see in the Garden.

The pretty pink and white stripped Rhododendron insigne is one of several flowering at the moment.  The leathery leaves have a silvery metallic underside which makes it very distinctive.  An Ernest Wilson introduction in 1908.


Crindodendron hookerianum, the Lantern Tree also known as Tricuspidaria is a Chilean plant introduced by William Lobb in 1848.  It is an evergreen shrub and thrives best in the South of England and the West Coast of Scotland.  It is well established here at High Beeches and is now in full flower attracting
hundreds of bees. There is a pink form called Ada Hoffman.


Another plant attracting the bees at the moment is Styrax hemsleyanus, the Chinese Snowbell Tree,  also a Wilson introduction from China.  A very attractive small tree with racemes of white bells in early summer.


There are a number of Magnolias flowering at the moment including Magnolia hypoleuca sometimes known as obovata.  A handsome tree with large leaves and strongly scented flowers.  It is a native of Japan and was first introduced in about 1820.

Yellows in the garden


Yellows in the garden for early April.  The daffodils are almost over but are fast being replaced by carpets of primroses.  There are cowslips in the meadow and celandines in the garden.

Rhododendron campylocarpum is already in flower one of the prettier rhodendron species.
It is a native of the Himalalays and was introduced by Sir Joseph Hooker in about 1849.


The delightful pale yellow catkins of
Corylopis gotoana flutter in the breeze, a member of the Hamamelidaceae family from Japan.

Caltha palustris also known as Marsh Marigold or King Cup and is reflected in Centre Pond along with Lyschimatum americanum (an invasive plant).  The young buds and foliage can be eaten but the plant is also toxic in large doses.


The less common Illicium anisatum is in flower, it is an aromatic, slow growing shrub from China and is also known as Japanese anise.


The magnificent Rhododendron macabeanum is hard to beat.  One of the best yellow forms is to be found in the garden here at High Beeches.
Posted by Unknown at 12:15 No comments: 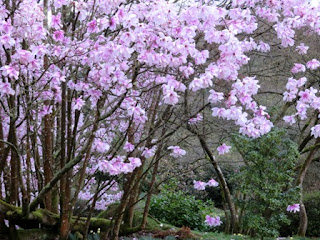 Magnolia sargentiana var robusta
is having one of its best years ever.
The weather has suited it and so it is not only flowering prolifically but has not been damaged by frost.
This afternoon it was looking particularly
beautiful in the spring light.  This tree is fairly remarkable.  It is highly likely that this plant is one of those that came from Chenault of Orleans who received seeds from the Arnold Arboretum which had been collected by Ernest Wilson in 1908, and which he multiplied by grafting.  It  flowered at Caerhays http://www.caerhays.co.uk/in 1931. 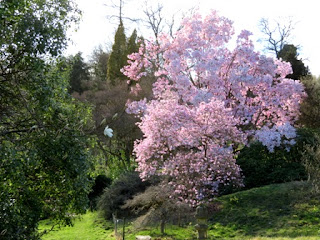 The tree here at High Beeches was blown down in the great Storm of 1987.  The decision was made to cover the root ball as much as possible and to prune it back.  The tree has continued to grow and flower each year ever since.  One of the surviviors of a  terrible night.

Today a visitor to the garden was stunned by the sheer quantity of flower. 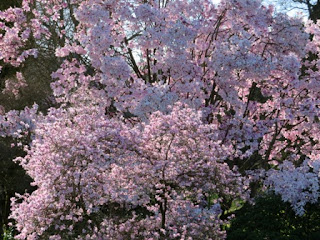 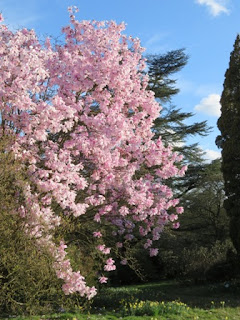 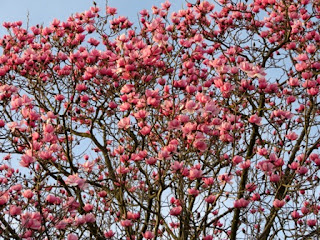 Magnolia campbellii is possibly the most magnificent of the Magnolias.  This tree grows here at High Beeches almost on the roadside and rarely fails to flower.  This year it is looking particularly superb due to the mild weather.

Magnolia campbellii is a native of the Himalayas and was probably first introduced to this country in 1865.  It is thought to have flowered first at Veitch's Nursery in 1895.  It is named after Dr Arthur or Archibold Campbell of Darjeeling who was appointed the first superintendent of the
sanitarium town of Darjeeling in 1839.
In 1849 he and Sir Joseph Hooker were
imprisoned by the mad Dewan of Sikkim
and had to be rescued by a British Team.
Campbell wrote many papers on Himalayan
geography. 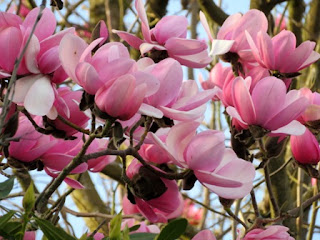 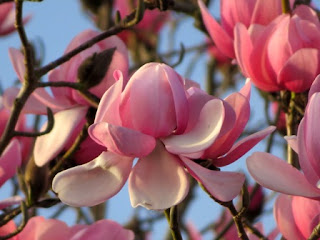